The world of mowing is changing

We are presently certifying a new product, the Spider Autonomous 2.0 mower with an autonomous control and navigation system.

We see the future in autonomous systems that help people with hard work with minimal operational requirement.

We are changing the future of mowing. 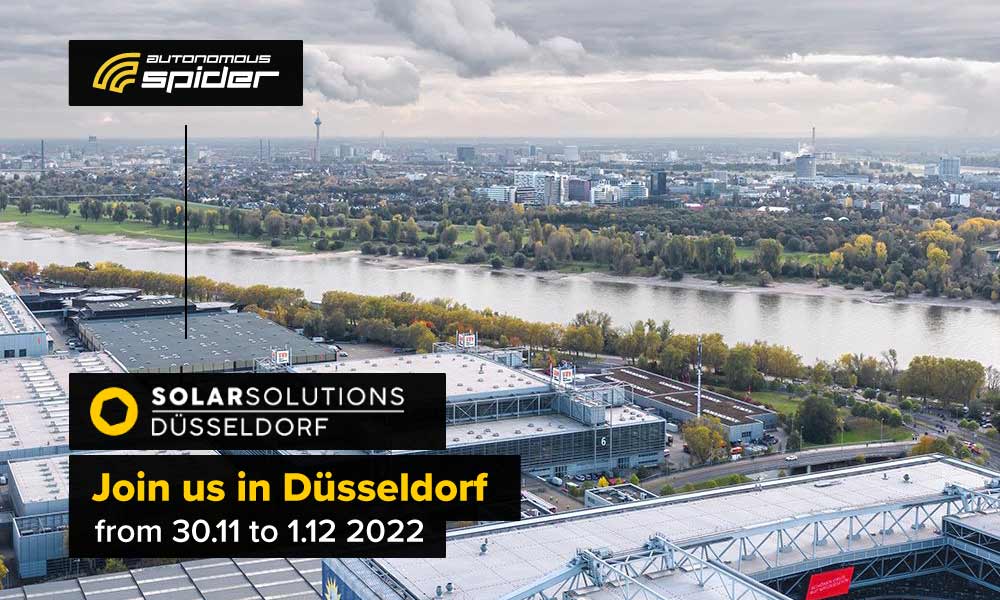 We invite you to our presentation of the Autonomous mower in Düsseldorf.

Write the date of November 30th to December 1st in your diaries and come to Solar Solution 2022 fair trade. We will be introducing our Spider Autonomous 2.0 lawn mower at one of the leading trade fair for solar professionals in Germany. 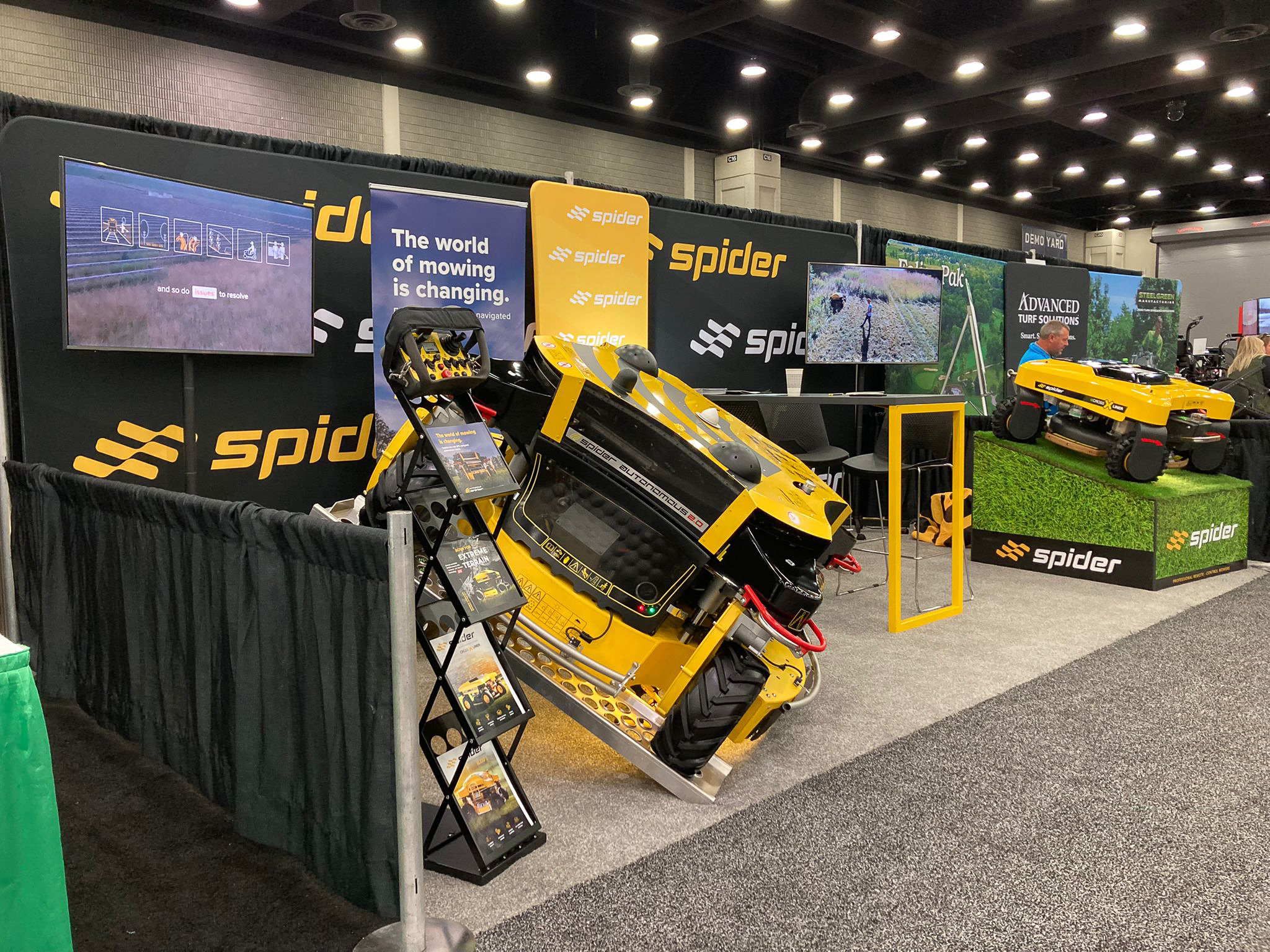 We introduced Spider Autonomous 2.0 for the first time in the USA. Our new autonomous mowing solution attracted great interest at Equip Exposition 2022 in Louisville. Our first presentation of the new autonomous system for commercial mowers.

We presented Spider Autonomous 2.0 to the public in May 2022 for the first time at the Intersolar Erope trade fair in Munich. We have been surprised by great interest in the new technology for professional landscapers, the questions that drive us forward in terms of development and incredulous looks showing disbelief that this smart machine is designed for cutting grass.

Autonomous robots have been designed and produced to work independently on an assigned task for a long time without the need for any human intervention based on a software system.

The autonomous system has sophisticated functions that allow it to automate the control of the mowing process, which used to be realized by people in the past.

Autonomous driving is often mentioned in connection with cars or other vehicles, which will secure safe and fast mobility of people and objects in the future without the need for control or driving done by a man.

The general definition of the word ‘autonomous’ in a technological context is ‘any system that operates its steps independently without the need for significant influence from humans’.

The mower is located by satellite navigation supplemented with a differential signal, which provides centimeter-level accuracy.

It is not a robotic grass cutting machine but a new generation of lawn mowers making the maintenance of green vegetation autonomous.

Watch how autonomy works for mowers. As a result of this merger, we can offer our customers the only existing commercial autonomous lawn mower suitable even for a complicated terrain.

The commercial autonomous slope mower brings up to 30 % higher efficiency, lowers operator costs up to 38 %, and offers universal use.

Only four steps lead to effective and flexible maintenance and care of large areas. Measuring and entering the route information

The first step before mowing is to measure the area precisely.

After measuring the perimeter, the obstacles are localized and projected on the route.

A custom-made software program then creates the ideal route to ensure the perfect mowing pattern of the entire area.

The software can subsequently edit and divide the routes into individual sections that may be loaded into the memory of a specific mower via an online portal.

It is possible to observe the real-time performance of individual mowers on the online portal mentioned above.

To start mowing, the operator needs to load the route of a particular area.

4G mobile Internet (or faster) is necessary to do this.

A satellite signal of the correction transmitter is required to locate an area at high accuracy.

After being guided to the starting point, the lawn mower is ready for the Autonomous mode.

Start and end of mowing

After starting the Autonomous mode, the mower moves to the beginning of the required route and follows it till the end, where it automatically stops.

The end of the route is usually close to the starting point of the mowing path.

When using more Spider Autonomous 2.0 mowers, it is necessary to load different routes that do not intersect to prevent the machines from colliding.

The devices return to their starting points after finishing the task.

One operator up to 3 mowers

Out of danger zone

Only one measurement to autonomy mowing

Under convenient conditions, one operator can control up to three autonomous machines simultaneously

You will increase your effectiveness by up to 30 % and save labor and operating costs. 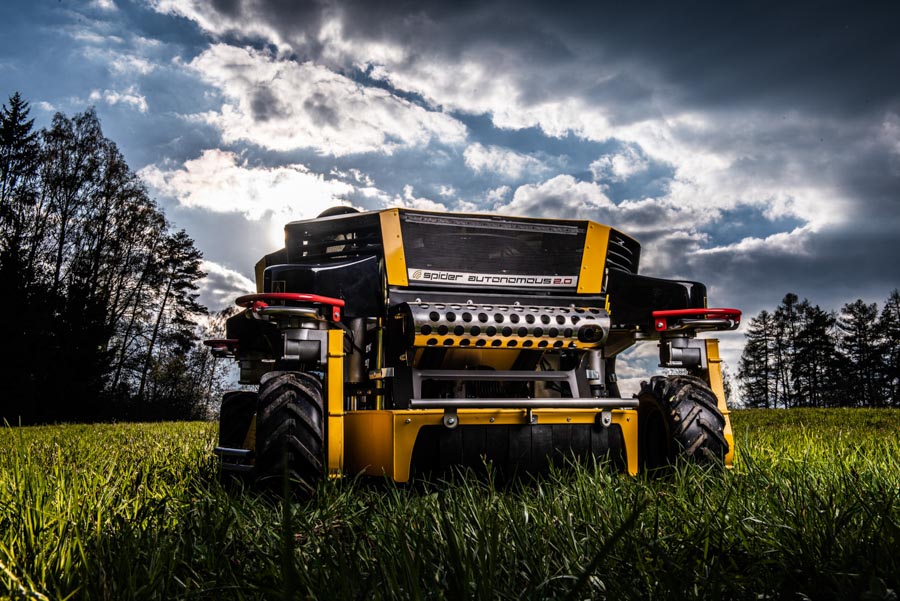 Thanks to the autonomous control and ergonomic RC, the operator is always at a safe distance from the machine. 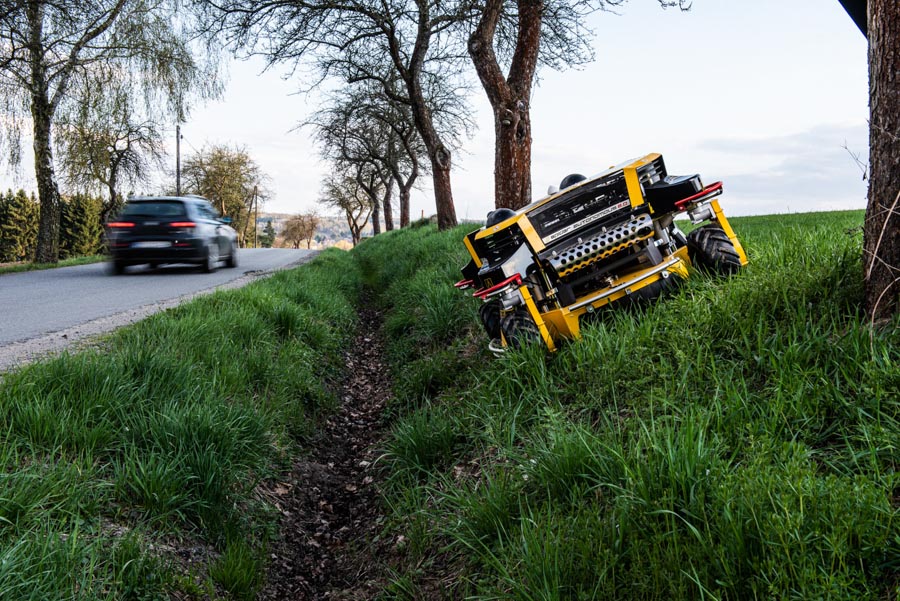 The Spider Autonomous mows automatically even without perimeter wires. There is no need for ground cable installation on the property.

You may edit the route according to the number of mowers.

Would you like to have more information from us?

The best way is to see Spider Autonomous 2.0 in action!

Should you be interested in seeing a new way of proffesional care and maintenance of commercial lawns with the Spider Autonomous 2.0 mower, feel free to register for one of our demonstration events.

We use the following systems: GPS, GLONASS, BeiDou, and Galileo.

The remote control is connected to the lawn mower through the Bluetooth technology.

The operator stays at a safe distance and is not exposed to vibrations, noise and exhaust fumes. The potential risk of an injury is thus limited to its absolute minimum.

The intuitive web portal is adapted for commercial use.

The online application contains fleet management of your machines there, plus you can easily load and edit the routes and evaluate their efficiency.

In practice, it means all the settings and operating components are managed remotely via the Internet connection with the mower. For simple management, it is possible to use a computer, tablet or smartphone.

You can switch at any time during the mowing process from the Autonomous to the RC mode.

This function is helpful mainly when relocating the mower to the start of the route and bypassing unknown obstacles.

We also offer the measurement service to our customers.

The Autonomous mode conducts the complete mowing task based on the uploaded map data.

The mowing is completed without the operator's intervention.

The machine saves the last uploaded map of the mowing area in its memory.

The upload or potential replacement is possible via the web portal interface: